In EU’s New Green Deal, and as part of EU’s sustainable and resilient recovery plan, one of the focus areas is “to exploit the opportunities of digitalisation for environmental protection, climate action and nature conservation as well as to limit the adverse environmental impacts of digital technologies and infrastructures”.

Of the global population was digital as of January 2021.

At e-Boks we fully recognize the urgency and the need for capturing the benefits of digitalization for the environment, while also recognizing that Information and Communications Technology (ICT) in itself can have a negative environmental and climate-related footprint, which needs to be simultaneously addressed.

As a digital platform and solutions provider, e-Boks is committed to delivering on UN Sustainable Development Goal 12: Responsible Consumption and Production. Targeting SDG 12.2.1: Reduce the material footprint per capita and per GDP, we have set an ambition of enabling 1.5 billion digital documents to be sent by 2030. This number includes digital documents sent from e-Boks’ own platforms as well as ‘white-label’ platforms, driven by third parties.

Governments and businesses are becoming increasingly conscious about the need for taking action to transition towards a low-carbon, climate-resilient economy, and citizens are pushing behind this development. As a digital postbox provider, e-Boks can provide access to paperless documents, minimizing both the use of paper and the physical transportation of letters. We can store documents safely – throughout a lifetime – without taking up any physical space. In that way, secure digital communication presents a convenient and cost-effective path towards cutting down on waste, reducing the use of natural resources such as water and trees and decreasing CO2 emissions. 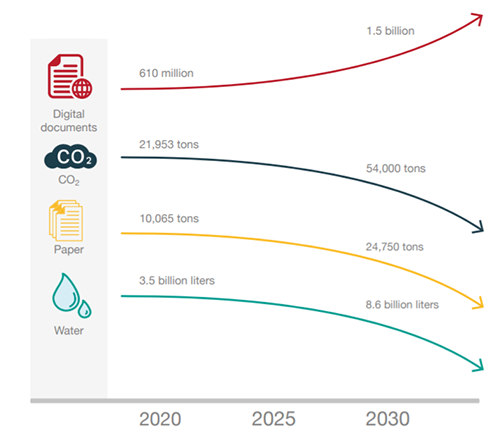 The United Nations Decade of Biodiversity came to an end in 2020 with a global review of progress towards the so-called Aichi biodiversity targets. The conclusion was that the world had failed to meet a single target to stop the destruction of nature. The UN Food and Agriculture Organization (FAO) produced a comprehensive report on ‘The State of the World’s Forests’ in which they concluded that the health of the world’s forests are essential for the future of biodiversity, home to 60 000 different tree species, habitats for 80% of amphibian species, 75% of bird species and 68% of mammal species. And yet, deforestation and forest degradation continue to take place at alarming rates.

According to the World Wild Fund for Nature (WWF), the global paper industry uses 40% of all wood traded globally, is the single largest consumer of water used in industrial activities in developed countries and despite improvements in environmental practices, still contributes to major water pollution. The pulp and paper industry not only contributes to the growing deforestation of our natural forests, threatening natural habitats and biodiversity, it also puts a strain on freshwater sheds and contributes to landfills. According to UNESCO, producing 1 ton of paper requires about 350,000 litres of water – or the equivalent of 7 people’s annual water usage. Already now, according to the World Resource Institute, nearly 25% of the world’s population lack access to clean water. In Denmark, e-Boks – used by 90% of the Danish population – contributes to saving approx. 10,000 tons of paper annually.

With EU’s new ‘taxonomy for sustainable activities’, Europe is showing the way to net-zero by 2050. The EU taxonomy is a classification tool, or list, of economic activities and performance criteria consistent with Europe’s commitment to net-zero carbon emissions by 2050 with a focus on building resilience to climate change, environmental degradation and loss of biodiversity. The taxonomy is also part of the EU’s New Green Deal towards sustainable recovery.

Under the recently agreed Taxonomy regulation, coming into effect in 2021, investors and companies will now need to disclose the environmental performance of the activities they invest in. e-Boks has over the past years provided a special service to our larger clients, tracking their e-Boks performance on the reduction of the material footprint on trees, water, and CO2 as part of our quarterly reporting. We have developed a communications tool ‘An e-Boks hour’ that visualizes the correlation between user logins, the number of paperless documents and water, trees and CO2 emissions saved. With growing stakeholder demands for transparency of environmental impacts across the full value chain, we expect that such tools will be in demand more than ever. 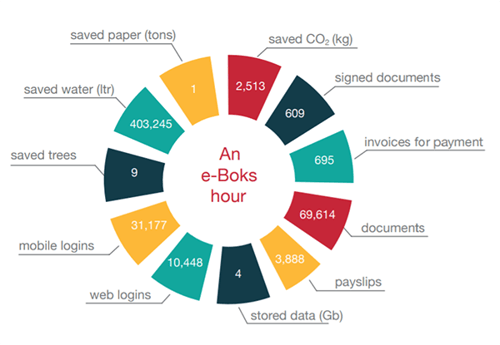 According to the International Energy Agency, data centres consumed less than 1% of global electricity demand in 2019 and, as of 2018, were responsible for 0.3% of global carbon emissions. Efficiencies in large ‘hyper-scale’ data centres, the conversion to cloud systems, and a greening data sector have contributed to a plateauing of energy consumption over the past 6 years, while data and applications have multiplied during the same period.

As of January 2021, approximately 60% of the global population was digital. To bridge the digital divide and ensure affordable and universal access to the internet for all, it is critical that we simultaneously green digitalization. Data centres in Northern Europe, where 95% of the population is digital, are leading the green transition. This is also the case for KMD that provides e-Boks’ international data centre, as well as our HybridCloud solution in Ireland, which is powered by wind. We are pleased to note that KMD has set an ambition of becoming net-zero by 2030. In 2020, KMD reached its ambition of net-zero energy consumption, among other things by sourcing their energy through Ørsted’s offshore windmill farm Horns Rev 2, and through certificates of origin on renewable energy from Norwegian hydropower.

As a digital platform provider with international growth potential, it is the ambition of e-Boks that by 2030 we can rely on 100% carbon neutral data from our data centre suppliers. Towards 2030, e-Boks has committed to annually plant 10,000 trees through Trees for the Future. org, resulting in a total of 120,000 trees planted by 2030. To date, 20,000 trees have been planted, supporting the vision of Trees for the future of creating forest gardens that can provide smallholder farmers pathways out of poverty and hunger.

Want to know more about the e‑Boks platform? 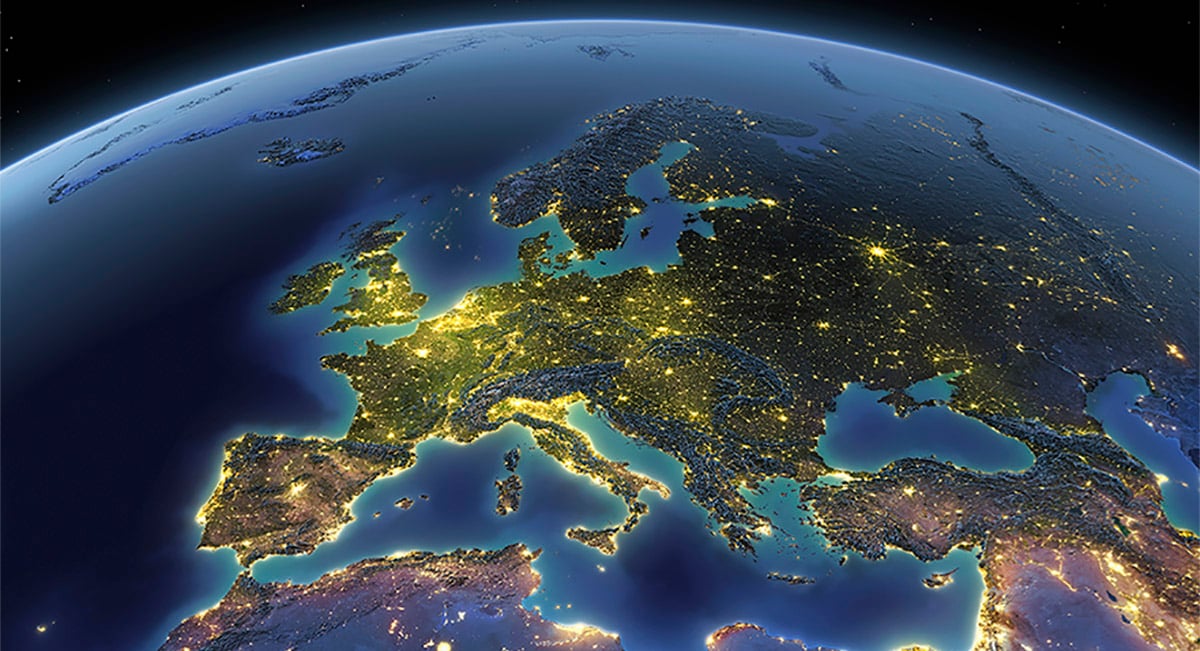